What is a Polypectomy?

A polypectomy is a procedure performed by doctors on patients who have polyps on the inside of their colon, or large intestine.

If you’re a little confused at this point, do not fear.

We’re going to have a look at exactly what polyps are, why they may need to be removed, recovering from a polypectomy and other information that will leave you clued up.

Let’s have a look at what you need to know about a polypectomy.

First off, let’s dive into what polyps are. They are, after all, the focus of a polypectomy.

In short, a polyp is an abnormal collection of tissue which grows out of tissue and into hollow spaces in the body.

Some types of polyps can change into cancer over time, usually a space of several years, but not all polyps become cancerous. The probability of this depends on the type of polyp.

At times, polyps found through a colonoscopy are likely precancerous. At this stage, they are called adenomas and, once removed, present no further risk to the patient.

Most are benign, however, it is not possible to rule out cancer without first examining the polyp.

It is for this reason that doctors recommend removing polyps when found so that they can be tested for cancer. 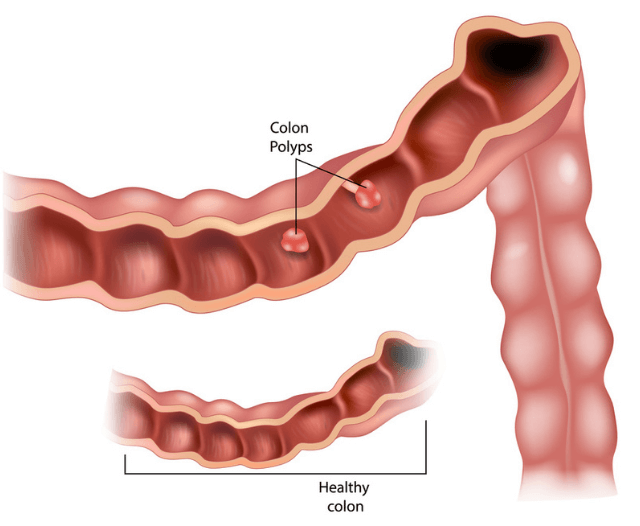 How Common are Polyps?

Polyps are more common than you may think.

Using the United States as an example, between 20-30 percent of Americans have colon polyps.

Uterine polyps are also a problem which increase in probability of occurrence as a woman ages. Resultantly, they are highly prevalent in menopausal women.

Due to their prevalence in urbanized society, it’s imperative to have a screening colonoscopy done at least every 10 years beginning at the age of 50.

The benefits are two-fold: prevent cancer by removing the polyps while they are in the precancerous stage, and assess whether a patient is at risk of developing colon cancer through a lab test of a removed polyp.

If you are thinking that extra tissue such as a polyp may not be a problem if it is benign, think again.

A polyp can grow to a large size.

Such is their growth potential that it can alter blood flow, put pressure on organs, and cause a range of connected side-effects resulting in a multitude of symptoms.

What to Expect in a Polypectomy Procedure

Before doctors can remove a polyp or polyps, they must first ascertain whether there is any present. For this, a procedure called a colonoscopy is used.

This allows the doctor to explore the segments of your colon in an attempt to find anything unusual, such as a polyp.

During a colonoscopy, if the doctor discovers polyps, they will usually perform a polypectomy at the same time.

Several methods of undertaking a polypectomy are available to the doctor and this depends in large part on the type of polyps they find.

Polyps can be small, large, sessile, or pedunculated. Sessile polyps don’t have a stalk and lie flat against the colon tissue whereas a pedunculated polyp grows on a stalk and can be thought of as a mushroom in terms of its shape.

In moderately rare cases, some polyps can be considered technically challenging or can be associated with an increased risk of complications.

The location and configuration of the polyp, as well as a large polyp size, can result in this scenario.

In these cases, endoscopic mucosal resection (EMR) or endoscopic submucosal dissection (ESD) techniques can be used.

In EMR, a fluid injection made of saline is used to lift the polyp from the underlying tissue and then removed piece by piece.

In ESD, the fluid is injected deep into the lesion and the polyp is removed in one piece.

If this technique is also not possible, such as can be the case with larger polyps, bowel surgery may be needed. This is the last resort, however.

Is Anaesthetic Needed Before a Polypectomy?

Generally, the doctor will give the patient a sedative which is usually administered through an intravenous needle. This helps the patient to feel calm and relaxed.

Anaesthetic is not needed although some patients prefer it.

The procedure itself, while not painful, can be uncomfortable which is why a sedative can help the patient have a more relaxed experience.

In total, the procedure lasts between 30 and 60 minutes and is referred to as an outpatient procedure. This means patients can return home on the same day as the procedure.

In the cases where surgery is required, patients will remain in the hospital for around three days depending on whether complications arise.

Recovery from a Polypectomy

General recovery normally takes a patient around two weeks at a maximum.

In terms of discomfort, patients may feel some pain following the procedure, especially immediately after. The doctor will prescribe medication to manage this pain.

It’s quite normal to experience some bleeding following the procedure but one’s doctor should be kept updated in case there is a complication such as heavy bleeding that stops and starts again.

Your doctor will make sure you are clear on what to do following your procedure with post-care instructions.

They may ask you to avoid certain dietary intake that may irritate your digestive system.

The recommended dietary restriction is normally around 2-3 days.

Some of the foods and liquids the doctor may ask a patient to avoid include coffee, fizzy drinks, alcohol and spicy food.

Apart from the above, your doctor will schedule a follow-up colonoscopy to ensure that the polypectomy was a successful procedure.

A polypectomy is a routine procedure that can eliminate polyps and prevent the onset of colon cancer as a result of cancerous polyps.

Patients should weigh up the benefits and risks but overall this is a procedure that is relatively non-invasive with a large degree of utility.

For most polypectomy recipients, the procedure is a minor inconvenience that can offer peace of mind with regards to general health.

This becomes especially important when patients are 50 years and older.

If you would like to book an appointment with Dr. Deetlefs  or would simply like more information on a particular GI topic, don’t hesitate to use our online booking form or call us at 021 551 8678.